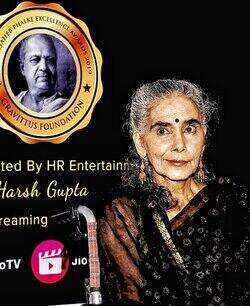 Film and TV actress Surekha Sikri passed away in the age of 75 in Mumbai on Friday due to cardiac arrest. Surekha had been suffering from illness for the past several months. And last year in September also had a brain stroke to her. Surekha Sikri won three national film awards in her life time. She worked in films and television both platform constantly. She become famous when she plays the role of “Kalyani Devi” in famous hit TV serial “balika vadhu”. She also got recognition from the role of “durga Devi Kaushik” in the movie “Badhai  ho”. For which she also got national films award for best supporting actress. Surekha Sikri best known performances was in the movies mammo , Tamas, Salim, landge pe mat ro, and daily popular show Balika Vadhu, was also her career’s mega point. The “tamas” film has been considered as her career best performance. After becoming a popular name on TV she got the famous role of “Durga Devi” in film “Badhai Ho”.

Surekha Sikri’s co-star from Badhai Ho, Ayushman Khurana, pays tribute to her on Instagram. “In every picture, we have a family, and we end up spending more time with the film family than with our actual families,” he wrote. One such lovely family might be seen at Badhaai Ho. It was the perfect family with the perfect cast of all my films. Surekha Sikri, our family’s grandma, was more progressive than the rest of the clan. And, you know what, she was just like that in real life It’s a bohemian We told her, “Ma’am, you’re the true star of our film,” and she answered, “I wish I had more work.” My friend Tahira and I were both surprised. We saw her frail demeanour as she walked towards her residence. That’s the last time I remember her. I’d want you to see her recite the nazm “Mujh-se pehli si mohabbat mere mehboob na maang” by Faiz Ahmed Faiz. Aapko aapko aapko aapko aapko aapko aapko a An outstanding performance. A master craftsman. It’s a legend. Surekha ma’am, you will be missed🤍.

Thank you for the beautiful memoriees” .

Manoj Bajpayee also paid tribute and wrote “ Very Sad news !!! Surekha Sikari ji, one of India’s finest talents, went away, leaving behind a legacy of outstanding performances in theatre and film!! On stage, she was a joy to see. I’ll never forget some of the memories I have of her acting in the theatre; she was a wonderful performer with a lovely personality!! RIP”.

Surekha Sikri has a son Rahul Sikri who is also an artist. She was married to Hemant Rege, who passed away in 2009 by heart failure. She graduated from the national school of drama in 1971. She was last seen in the movie ghost stories, with jahnvi Kapoor on Netflix.