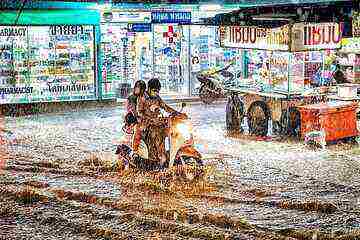 Due to the arrival of the monsoon in North India, many people have got relief from the heat, but due to rain, problems have increased in many places. In several places, heavy rains have caused havoc. Torrential rains have come as a disaster in many states like- Uttar Pradesh, Bihar, Himachal, Uttarakhand, Gujarat, Maharashtra, and West Bengal.
The Meteorological Department says that there may be heavy rain at some places like Himachal, Uttar Pradesh and Uttarakhand for the next 4-5 days. An orange alert has been issued by IMD in Rajasthan and Jammu and Kashmir and the same yellow alert has been issued in Himachal Pradesh and Uttarakhand. Apart from this, according to the Meteorological Department, there is a possibility of heavy rain in parts of Uttar Pradesh, Uttarakhand, Himachal Pradesh, Karnataka, Goa, Kerala, Maharashtra and West Bengal during the next 24 hours. At the same time, moderate rains have been predicted in some areas of Bihar, Jharkhand, West Bengal, Rajasthan, Chhattisgarh, Punjab, Haryana, Jammu and Kashmir and Delhi.
Credit – Komal Sharma