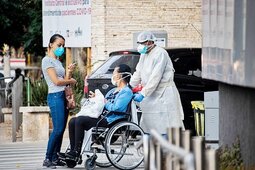 In Brazil, 868 people have died due to pandemic during the last 24 hours, after which the death toll has increased to 5,41,266.

The National Health Ministry gave this information late on Saturday night during the last 24 hours, 34,339 new cases have been reported in Brazil, after which the number of infected has increased to 1,93,42,448.

Brazil currently ranks third in the world after the US and India in terms of the number of people infected. And, this country is second only to America in terms of death.