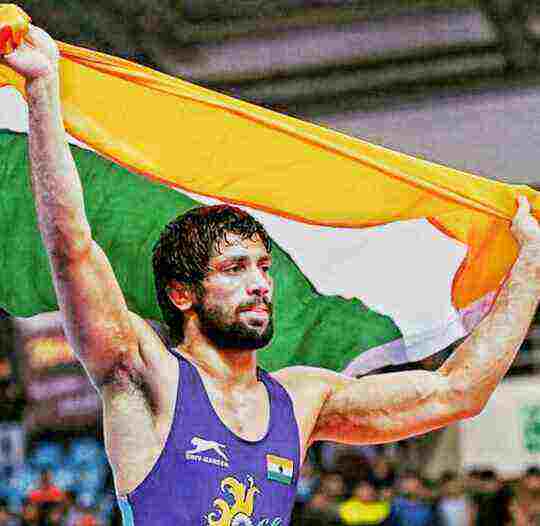 Ravi Kumar Dahiya the Indian wrester made the nation proud when he staged a great comeback against Kazakhstan’s Nurislam Sanayev on Wednesday (4 August) during men’s 57 kg freestyle wrestling semi- final match and made his way to gold medal final in 57 kg freestyle wrestling. After indian wrester Sushil Kumar in 2012 London Olympics Dahiya is  the second Indian wrester ever to enter in the final.  He will now face off against Zaur Uguev of Russia in the final on Thursday (August 5) and may become India’s second athelete to win a gold medal at Tokyo Olympics.

The fourth ranked wrestler trailed 2-9 after Sanayev effected a few ‘fitley’ (leg lace) but as the time goes by, Dahiya recollected and got hold of his opponent with a double leg attack that came as a ‘victory by fall’. Regardless of enormous shortfall, Dahiya keep his calm, showing incredible mental strength and dramatically turned the bout in his favour.

After the end of the first half, Dahiya was leading with a score of 2-1, however Sanayev was ready and attacked the Indian’s left leg, obtaining a decent grip of that turned him thrice to got six points in right away. After that Dahiya’s lost his lead and he was starting to lose but his superior stamina and technical prowess was still there. The last one minute was more than enough for him to turn the match and he did as expected.

He got hold of Sanayev with a double leg attack and then pinned him tightly, Kazkahstan wrestler’s back on the mat and end the bout with a might ‘pin’. Even in his previous bouts Dahiya was powerful because the 23-year old won each his last bouts on technical superiority and made the way to the ultimate match. He made the  terribly simple draw by winning against Nigeria’s Ekerekeme Agiomor, the African championship bronze medallist by technical superiority so prevailed 6-3 against China’s Zushen Lin within the match. The fourth ranked Dahiya surpassed Colombia’s Tigreros Urbano with a score of 13-2 in his   beginning bout and then outclassed Bulgaria’s Georgi Valentinov Vangelov (14-4).

The reigning Asian champion won the bout with one minute and 10 seconds still remaining in the bout, which was stopped after he got  a winning lead.

In the 86kg, the Nigerian had the strength but Deepak was technically sound and won easily. Against Lin, though, the 22-year-old Indian struggled. He started with a 3-1 lead but Lin effected a takedown to make it 3-3 and head on criteria. The referee awarded  2 points to Deepak for a throw however the Chinese won the challenge.

He is presently only the fifth Indian wrestler to possess won an Olympic medal after KD Jadhav, Sushil Kaumar, Yogeshwar Dutt and Sakshi Malik. Jadhav had become first indian wrestler and conjointly the primary individual Olympic medalist when he won a bronze throughout the 1952 Helsinki Games.