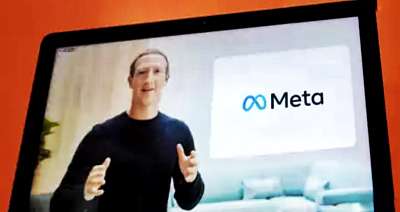 Washington, ANI. Late Thursday night, the social media behemoth Facebook revealed its new identity. It will now be known by the new name as Meta. After 17 years, Facebook announced the decision to change the name by tweeting about it. The metaverse, a new chapter of social media, will be the future road of social interaction, according to Facebook, a social media business founded in 2004. This will be a collaborative initiative involving individuals from all around the world.

“The names of the other applications we established – Instagram, Messenger, and WhatsApp – will remain the same,” Facebook stated in a series of tweets from its official Twitter account. This new brand will encompass a variety of apps and technology. The company’s corporate structure, on the other hand, will remain unchanged. CEO Mark Zuckerberg stated the new name will focus on establishing the metaverse while speaking at the company’s Augmented Reality Conference.

Let us remind you those three years ago, the term “metaverse” was used in dystopian fiction. However, in Silicon Valley, this term is still a big topic. In the digital realm, the phrase refers to a virtual and interactive environment. The metaverse is a virtual universe in which a person can exist even if he is not there physically. Virtual reality is used to attain such a purpose.

Because of this, Facebook changed its name; however, it is unclear what effect this will have on users..?

Mark Zuckerberg, the CEO of Facebook, has introduced the platform’s new name. Meta is the new name for this social networking site. In such a circumstance, the question of why the firm changed its name and what effect it would have on people arises; you will find the solution in this news. Let’s see…

Because of this, Facebook had to change its corporate name…

Because of Metaverse, Facebook had to update its name. When we talk about the Metaverse, we’re talking about a computer-generated virtual place where people may readily communicate with one another. Virtual Reality technology is used in this space. The introduction of the Metaverse, according to Mark Zuckerberg, will benefit people significantly. Users will get access to the most up-to-date features, such as parental control. Aside from that, the users’ personal information will be entirely secure in the virtual world.

What advantages would the new name provide?

First and all, let us state that former Civic Integrity Chief Samidh Chakraborty offered the new name to Facebook for public awareness. After the company’s CEO Mark Zuckerberg made significant investments in Virtual Reality and Augmented Reality a few years ago, there were rumours that the name will be changed. The business’s name has now been altered. This will now develop a virtual world and provide new career prospects.

What effect will it have on users?

The Metaverse virtual realm, according to the corporation, is set in a three-dimensional space where users may design their own avatars to represent themselves. Users from all around the world will be able to play video games, view movies, go to concerts, and remain in touch with coworkers using the space. Not only that, but users will be able to meet pals in this virtual arena in the same manner they would face to face. This, according to the corporation, will improve the user experience. Users will also be able to travel in virtual space in the future using a VR headset.