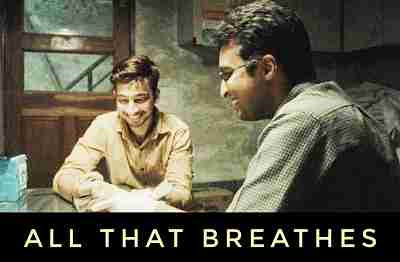 ‘All That Breathes’ Movie Review and Trailer, Sundance 2022: Shaunak Sen’s documentary focuses on a pair of brothers dedicated to rescuing injured birds of prey in the highly polluted air over New Delhi

The opening shot of Shaunak Sen’s documentary All That Breathes is probably the most beautiful and unnerving thing I saw at this year’s virtual Sundance.

It is a slow tour of a wasteland in New Delhi at night, initially a corner full of garbage, lifeless.  Then the residents of the night come out.  A dog here.  A cat there.  Something unidentifiable, but probably wild, lurking around the corner.  The camera keeps panning, adjusting focus for any movement.  Was it a running rat?  Probably.  A truck passes in the background.  another rat  Or two?  Or a dozen?  Accompanied by a cacophony of squeaks, a rat mischief emerges.  This is your land.  The scene ends not with a loud cut, but with the lens flare of an oncoming car’s headlights.

In just under three minutes, Sen has outlined a vision of New Delhi in which modern life, in particular pollution and overpopulation, have put new pressure on the balance between humans and nature.  What follows is one of the most dreamy and provocative documentaries I have ever seen.

Depending on your level of investment, All That Breathes could be a documentary about climate change and the crucial need to understand how animals are adapting and how humans must adapt.  It could be a spiritual piece about networks of synergistic connectivity between, well, everything that breathes.  It could be a humanist meditation on how we treat each other, how we bring people down by comparing them to animals, but how we really should treat everyone and everything a little better.  Or it can be just 91 minutes with a couple of brothers who are really into birds.

Nadeem and Saud live in a predominantly Muslim working-class neighborhood of New Delhi.  They make money doing something to do with soap dispensers, but their passion is their fledgling organization called Wildlife Rescue.  Since 2003, the brothers have been collecting injured kites, birds of prey that seemingly float effortlessly over the city, occasionally descending on landfills to consume waste.  The air quality and air visibility in New Delhi are so unpleasant that birds literally bump into each other in mid-air.  Nadeem and Saud, when they’re not lobbying for donations and grants, care for the kites, mostly in a cramped, dingy basement and a rudimentary rooftop enclosure.

Nadeem and Saud’s quest is a noble one, inspired by their late mother, but as a character study, All That Breathes shows the toll this consuming hobby has taken on them.  Nadeem knows the impact they are having on a micro level, but he longs to see the world and study abroad, taking what he has learned globally.  Saud is happier to remain local, but he is overwhelmed by the city’s out-of-control ecosystem, with more birds injured than he can handle.

Providing a bit of levity is his new volunteer employee, Salik, who took me half the documentary to realize he’s not another brother: there are more close-ups of kites than people here, and Sen is fine without detailing every interaction.  .  Salik brings a childlike enthusiasm and curiosity, instigating conversations that often have an apocalyptic slant based half on the real world.  Would birds survive a nuclear attack on New Delhi?  Is there really enough water to cover the entire Earth or is it just science fiction?

That line between the real and the apocalyptic is something that Sen and cinematographer Benjamin Bernhard are always aware of, and it is also drawn through the ephemeral and mechanical music of Roger Goula.  That long opening shot is just the first of many times the camera must capture the intersection of the natural and the human-chaotic in the city.  Wild pigs march in procession along a river.  Oxen navigate the increasingly decrepit streets.  The monkeys teeter precariously on the wires that connect the stacked apartment complexes to modernity.

Viewers may notice that, as Saud and Nadeem look up at the sky, All That Breathes is formally designed horizontally, panning to see what happens when all of nature comes together at street level, rather than vertical.  Even the end credits are horizontal.  Sen and Bernhard’s favorite kind of shot is the one where what you’re looking at gives way, through a backstage approach, to something else, either in the background or foreground, like the man-made bonfire falling in a distant blur as we watch a snail, inching forward.  As with everything in documentary, you can appreciate shots as beautiful natural images forged in a bustling urban space or as a reflection of the persistence of flora and fauna at a time when civilization has run amok.

Always in the background are the New Delhi protests stemming from India’s Anti-Muslim Citizens Act.

“You don’t care about things because they share the same country, religion or politics.  Life itself is kinship.  We are all a community of air,” says Saud.  It’s a great thought, but All That Breathes allows you to process it in any depth you choose.  Portrait of a city?  Portrait of a pair of heroic brothers?  Portrait of humanity on the brink of COVID?