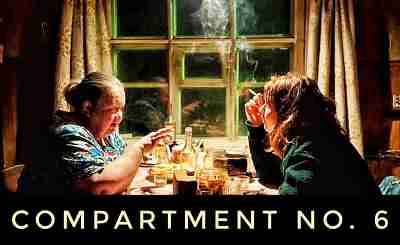 Review and Trailer of Movie Compartment No. 6: It is already one of the best movies of this year

There’s something surprisingly intimate about Compartment No. 6. It’s not so much in the theme or stylistic approach or even the themes of the film.  Rather, it’s in everything in between: in the way it captures a mood, an inexpressible sense of loss and wandering that ignites the viewer’s mind.  There’s nothing particularly surprising about the story, but Finnish director Juho Kuosmanen finds a way to make an old story feel new.  It opens theatrically in the US this week, but it premiered at Cannes last year, where it won the Grand Jury Prize, and is currently on the shortlist for Best International Film at the Oscars.  So I guess that makes it one of the best movies this year and one of last year.

Compartment No. 6 follows two disparate souls forced together during a long train ride from Moscow to Murmansk.  When we first meet Finnish student Laura (Seidi Haarla), she awkwardly wanders through a house party full of Russian intellectuals trying to outdo each other.  Her girlfriend Irina (Dinara Drukarova) is the one who organizes the party, but this does not give Laura prestige or protection;  hers and hers’s heavily accented russian hers still get the teasing part from her, and it’s clear that she feels completely out of place amid Irina’s wine-drinking, date-talking, know-it-all guests. .

With her budding interest in archaeology, Laura leaves the next day on a trip to the arctic port city of Murmansk to see the Kanozero petroglyphs, ancient rock drawings dating back some 5,000 years.  She and Irina were supposed to go together, but Irina claims to be busy with work, so Laura must travel alone.  Once aboard the train, she is forced to share her compartment with Ljoha (Yuriy Borisov), a rude young man who, shortly after her arrival, gets drunk to the bone and asks her, in the crudest terms, if she is there to do tricks.  Quite a step below elegant Irina and her high-ceilinged apartment filled with books and pictures.

The film is based on a popular 2011 Finnish novel by Rosa Liksom, but Kuosmanen has taken some liberties with it.  Originally, there was a noticeable age difference bREAD MORE: etween the two leads, and the train was headed to Mongolia.  Their meeting also took place in the last days of the Soviet Union.  The time period of the movie isn’t specified, but it appears to be the late 1990s – a character mentions Titanic at one point and the Kanozero petroglyphs weren’t discovered until 1997, which would suggest it’s the last days of the regime of Yeltsin, another was turbulent and wild in Russia.

Kuosmanen fires with an immediacy that seems to go against the literary origins of the story.  He keeps his camera close to his performers, often hand-following them through the cramped train, highlighting their loneliness and discomfort while capturing the strange air of unpredictability that builds up whenever he’s indoors for extended periods with someone he doesn’t know. not know in particular.  I like it.  Outside the train rolls a gray, cold and industrial landscape, which we only see in dark and threatening glimpses.  Inside, shot in warm colors, we feel sheltered, but he’s a sickly, unattractive guy in keeping with the restless camerawork.  You can still feel the cold in your bones.

There were probably practical reasons for such aesthetic choices (the second-class compartments in Russian train cars aren’t exactly hospitable to film camera crews), but they also work quite well from an artistic standpoint.  Interestingly enough, I spent a surprising amount of time on Russian trains in the mid-1990s, and was amazed at how well the film captured the physical and atmospheric qualities of the experience.  But you don’t have to be familiar with this specific situation to appreciate what Kuosmanen has done.  You get lost in the mood of the image as this otherwise very specific journey begins to feel like a cosmic one.  Anyone who’s ever felt adrift in a world where they longed for a friendly face or kind gesture (any human being, in other words) should be able to relate to that.

Of course, Laura and Ljoha get to know each other better throughout the journey.  Despite the disastrous first impression, he turns out to be surprisingly loyal and generous, and an understandably distant Laura begins to warm up to this curious young man.  (If you squint really hard, you might imagine this movie as a grittier, grittier Before Dawn set in the midst of post-Soviet decline.)  Both people are on the loose: Laura doesn’t really know much about petroglyphs or even go around seeing them;  for her, the purpose of the trip was to be with the beautiful and worldly Irina more than anything else: a nice cocoon against the outside world that was never going to last.

If Haarla’s Laura is hesitant and submerged, Borisov’s Ljoha is wiry and restless.  From one angle, she looks like a pure predator.  However, take a closer look and it is possible that she sees pure prey.  His eyes blaze as if they could peer into your soul or eat you alive, but they also dart wildly as if an unseen danger could attack him at any moment.  She works in a big mine, but says that she wants to save money to start a business.  When she asks him what kind of business, he seems puzzled by the question, “Fuck.  Just business.” (One remembers the mechanics of the word: occupation.) Laura and Ljoha are a study in contrasts, but like most studies in contrasts, they also complete each other, though not in a romantic way, like the by Jerry Maguire. She doesn’t seem able to navigate this reality; she seems able to navigate this reality alone. Together, perhaps just for a brief moment, they find purpose and grace on the other side of the world.