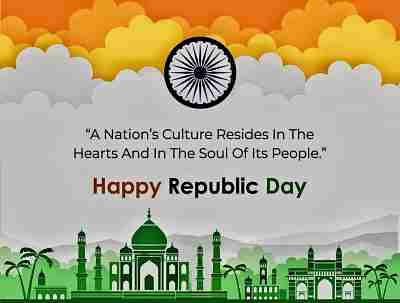 On India’s Republic Day, Here Are Some Often Asked Questions and Answers

What is Republic Day? Why is it celebrated?

Answer: India has been celebrating Republic Day every year on 26th January to honor the date of coming into force of our Constitution.  While India became independent on August 15, 1947, it did not have a permanent written constitution, and the laws in the country were based on an updated version of the British established, Government of India Act 1935.  However, a fortnight later on August 29, 1947, a Drafting Committee was appointed for the formulation of a proper Indian Constitution, headed by Dr. B.R.  Ambedkar was  It is celebrated on 26 January because on the same day in 1929, the Indian National Congress made the historic declaration of Indian independence (Purna Swaraj) from the British rule.

How did India become a Republic?

Answer: India fought a long and difficult battle for independence from the British Empire.  Known as the Indian Independence Movement, the fight lasted 90 years, starting with the massive Indian rebellion of 1857 against the British East India Company in the northern and central parts of the country.  During the decades following the movement, Mahatma Gandhi (affectionately referred to as the “Father of the Nation”) led a successful strategy of nonviolent protest and withdrawal of cooperation against British authority.

Apart from numerous deaths and imprisonment, independence came at a cost – the 1947 partition of India, in which the country was divided along the line of religious majority and Muslim-majority Pakistan came into existence.  The growing conflicts between Hindus and Muslims, and the need for a unified secular democratic republic, led the British to consider it necessary.

It is important to note that although India officially got independence from the British on August 15, 1947, it was not completely free from them.  The country remained a constitutional monarchy under King George VI, who was represented by Lord Mountbatten as the Governor General of India.  Lord Mountbatten appointed Jawaharlal Nehru as the first Prime Minister of independent India.

To proceed as a republic, India needed to formulate and implement its own constitution as the governing document.  The work was led by Dr. Babasaheb Ambedkar, and the first draft was completed on November 4, 1947.  It took almost three years for the Constituent Assembly to finally ratify it.  This happened on November 26, 1949, but the assembly waited until January 26, 1950, to implement the new constitution of India.

Who is known as ‘Father of Indian Constitution’?

In how many days the Indian Constitution was prepared?

How many gun salute is given to the President on Republic Day?

Why Republic Day is celebrated only on 26 January?

Answer: It is a well known fact that our country got independence on 15th August 1947.  However, the constitution was brought a year later.  On 29 August of the same year, a drafting committee was formed to consider what it would include.  The Constituent Assembly adopted the constitution on 26 November 1949 and the country was declared a sovereign republic on 26 January 1950.

Interestingly, on this day in 1929, the Indian National Congress also passed the Declaration of Indian Independence from British rule, also known as ‘Purna Swaraj’.  So for these reasons 26 January was chosen.

Where does the Republic Day Parade start in New Delhi?

What is the route of the Republic Day Parade?

Read More: Learn how to join the Air Force as a pilot

What happens on Republic Day?

Answer: Celebrations take place on a large scale in Delhi, the capital of India.  Traditionally, the main attraction is the Republic Day Parade.  It includes contingents and demonstrations from the Army, Navy and Air Force.  The parade also includes colorful floats from each state of India.

Before the parade begins, the Prime Minister of India lays a wreath at the new National War Memorial near India Gate in memory of the soldiers who died in the war.  After this a silence of two minutes is observed.

Small Republic Day parades are also organized in each state.

The second most impressive display of military might (after Delhi) can be seen in Kolkata, West Bengal.  An extensive military parade takes place on the historic Red Road in front of Fort William on the grounds of Kolkata, beginning with a traditional military fly-past.  It includes various marching squads of the armed forces, a display of weapons, military bands and tableaux of various military departments.

The ceremonial parade at Marina Beach in Chennai, Tamil Nadu begins with the hoisting of the Indian national flag near the statue of Mahatma Gandhi.  This is followed by a march by contingents of the armed forces, paramilitary personnel, state police personnel and various school bands.  Also, a display of various government departments floats.  Local students also perform in cultural events.

MG  But there is a parade and cultural fair at Field Marshal Manekshaw Parade Ground.  Road in Bangalore, Karnataka.

In Mumbai, Maharashtra, Republic Day celebrations are organized by the state government at Shivaji Park in Dadar and there is a parade of police force.

Indians love a good party, so many people and housing societies organize individual Republic Day celebrations.  These often hold fairs and talent competitions.  Patriotic songs are played through loudspeakers throughout the day.

The Beating the Retreat ceremony takes place on 29 January after the Republic Day parade in Delhi.  It is performed by bands from the three wings of the Indian Army – Army, Navy and Air Force.  This type of military ceremony originated in England and was conceived in India in 1961 to honor the visit of Queen Elizabeth II and Prince Philip for the first time since independence.  Since then, it has become an annual event with the President of India as the chief guest.

Who was the first chief guest at India’s first Republic Day parade in 1950?

Who was the first person who was invited from Pakistan as the chief guest of the Republic Day parade in India?

Answer: Governor-General Malik Ghulam Muhammad was the first person from Pakistan to attend the Republic Day Parade at Rajpath, New Delhi as the chief guest.

When was our National Flag adopted?

Answer: Our national flag has gone through a lot of changes until its adoption in its present position on July 22, 1947, less than a month after it won its freedom struggle against colonial British rule.

Who was the chief guest of India’s first Republic Day celebrations?

Answer: The first chief guest of the Republic Day celebrations in 1950 was Indonesia’s first President Sukarno.  The reason Jawaharlal Nehru invited him was to shed light on the Indonesian struggle against Dutch rule in his country and at the same time the two shared anti-colonial ideologies.

When was the first parade held at Rajpath?

Answer: The iconic Republic Day parade, which we have grown up with, began in 1950 at the Rajpath in New Delhi when the day was first celebrated.

Answer: Those who wish to have an alcoholic toast to celebrate Republic Day should note that it is a dry day across India.  This means that barring five star hotels, all other shops and bars will not sell liquor.  It is generally still readily available in Goa.

Who designed the Indian National Flag?

Our national flag was designed by a person named Pingali Venkayya.  He was a freedom fighter who hailed from Machilipatnam, Andhra Pradesh.  Initially, he designed the flag for the Indian National Congress.  Later, it was modified in 1947 and adopted as the flag of the country.