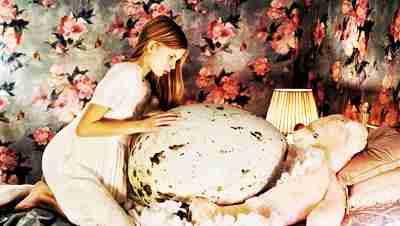 Often in classic dark fairy tales, mothers are notable by their absence, which often gives way to sinister stepmothers.  In contrast, in Finnish director Hanna Bergholm’s compellingly creepy first feature, Hatching, the syrupy sweet mother is a suffocating presence;  Instead her fixation contributes to the birth of a demon, creating an ancient picture of domestic harmony.  A highly original coming-of-age thriller in which a troubled pre-adolescence sparks a terrifying physical battle between the ego and the id, this body-horror nightmare explores what happens when love is replaced by an unnatural obsession with perfection.  If so, what happens to maternal instinct?

Premiering in the midnight section of the Sundance Festival ahead of IFC’s April 29 release, this expertly handcrafted film features a quirky animatronic creature that recalls elements of everything from aliens to Jurassic Park.  But the narrative engine harkens back to human relationships too much, again implying that some of the most effective advanced horror of late has come from female filmmakers.

The early images featured DP Jarko T.  The camera of the line is floating over an immaculate community of similar-looking houses, roads separating them from a birdbath.

In a home, 12-year-old gymnast Tinja (Siri Solalinna) goes through her stretching exercises while her mother (Sofia Hikila) flaunts with a camera and selfie stick while shooting scenes for her video blog, “Lovely Everyday Life”  .  That’s Mary Poppins as a Real Housewife.  Dad (Jani Volenen) responds with a laugh as he interrupts his work, and Tinja’s baby brother Matias (Oiwa Olila) is a smiling mini-me version of his father, albeit with a strange edge.

Production designer Pavi Ketunen’s interior is all soothing pastels and rose-splattered wallpaper, perfectly coordinated with family outfits by costumer Ulrika Solin.  But something about this carefully crafted environment is ambiguous, somewhat off-putting.  This is soon magnified when a crow crashes into a window, creating maximum chaos as it swoops around the living room, displaying vases, glassware, lamps and even  That even a chandelier crashes.

Tinja eventually captures the winged intruder, gently cradles him in a throw rug and proceeds to release him outside.  But her mother asked her to hand it over instead, patted the bird’s neck with a smile and then instructed Tinja to throw it out in the recycling bin along with the organic waste.

Life seems to soon be back in a meticulously “normal” order.  Tinja meets a friendly new neighbor, Rita (Ida Mattanon), around her age, but the girl’s dog tries to bite her.  Tinja’s mom is busy editing a new introduction to her blog, complete with delightful slo-mo scenes of the family in the game and sacred images of mother and daughter wearing flower crowns just outside midsummer.  When Tinja kisses her mother’s handyman, Tero (Rino Nordin), she explains to her daughter that he is a “special friend” who meets needs that her influential father does not.  But she asks Tinja to keep it a secret, “between us girls.”

The rot behind this Stepford creation is evident when Tinja finds a bird missing from the dustbin and near death in the woods with freshly laid eggs in the house.  Tinja takes the egg home, nestles it in her pink teddy bear to hatch.  The egg grows at an accelerated rate to the size of a boulder, eventually giving rise to a strange creature that is both repulsive and dearly needy, which Tinja hides from her family under her bed or in her closet.

Meanwhile, Tinja’s mother oversees her progress in gym class at school, where her efforts for the final competition spot are threatened by Rita’s skills on the beam.  It certainly doesn’t fit in with the painstakingly planned family narrative of the mother, in which Tinja is already struggling to play her part.  Ilja Routsi’s screenplay is filled with scathing remarks of the ways in which a reluctance to disappoint a demanding parent can instill crippling fear in a child.  That concern is written over the intense features of the young Sollina, a stunning appearance in her first screen role.

The less you know about it, the better, but the title’s hatching is an event of wonder and suspense, heralding a strange, enigmatic, unexpected appearance in the story that puts an emotionally detached, friendless Tinja to rest.  also provides.  As the creature grows, it sheds the characteristics of the species from which it came, takes on a more disturbing aspect and develops its own instincts.

Those uncontrollable tendencies seem to stem directly from a psychic connection with Tinja, whose ruthless impulses are manifested with startling brutality, endangering everyone from Rita to Tinja’s mother.  When the latter’s extramarital affair with Terro is threatened, a brutal conflict erupts between mother and daughter.

Bergholm’s assured visual sense and vocal command is matched by the fine work of the actors, especially Sollinna, who is both terrified and horrified at the creature’s stampede;  and Heikkila – a Scandinavian Elisabeth Moss – who deftly shows the ugly cracks in the mother’s controlling veneer.  As the soulful carpenter, who represents a bridge to a less stifling existence with his rustic fixer-upper home and desire to actually hear Tinja, Nordin provides a more grounded contrast to the characters tied to the artificial world.  which he has built around him.

A fascinating window into the psychological and emotional mine field of early puberty and the torn feelings of a vulnerable child given her deepest instincts, hatching delivers.