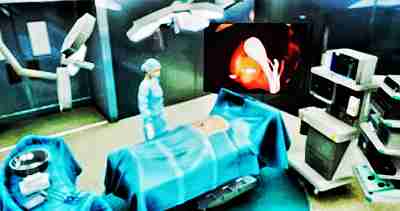 The Institute of Applied Sciences and Technology (ICAT) of the National Autonomous University of Mexico (UNAM) presented the first immersive laparoscopic simulator for medical students.

The future doctors of the Maximum House of Studies will be able to continue their surgical training despite the COVID-19 pandemic that since March 2020 has limited such practices.

Fernando Pérez Escamirosa, a member of the ICAT Intelligent Systems Group and head of the project, assured that residents will now be able to return to the operating rooms even though the surgeries have been largely canceled to avoid contagion by the SARS-CoV-2 virus.

According to Escamirosa, this tool is already enabled to simulate a cholecystectomy or gallbladder removal, but it can be adapted to other surgical procedures.

The programming lasted almost a whole year, but it was possible thanks to the computer engineer, Eduardo Ruiz, who modeled it in 3D to make it look like a real one.  It all started, they described, as an operating room to perform some small cutting or transfer tasks.

“We were in the operating room, measurements and photos of all the devices were taken.  Photogrammetry techniques were used to apply textures, so that it was a scenario that enveloped you, so that you really felt that you were inside the operating room”, explained Ruiz.

In addition, the simulator has a real scenario in which the distractions that a surgeon faces can even be integrated: the sound of monitors, the voice of the nurse or a ringing telephone, among others.

For now, the simulator consists of 3D glasses, as well as two sensors for handling medical instruments, and has already been launched in the surgery area of ​​the “Federico Gómez” Children’s Hospital of Mexico.

Currently, there are 35 students in the area of ​​laparoscopic surgery in said hospital who use the simulated.  This, according to those responsible, allows them to continue their practices without having the risk of becoming infected.

“They needed to be pre-trained and this simulator is a good tool to do it,” explained the head of endoscopic surgery at the Children’s Hospital, Ricardo Ordorica Flores.

David Medina Álvarez, a student at the UNAM School of Medicine, described the tool as friendly to the user and, above all, to people in Medicine who are not very familiar with the Engineering or Computing environment.

“I recommend the use of these types of tools and trainers, because they allow a person to have a first contact with these procedures without using a lot of resources or even being in front of a patient,” he stated.

Among the future plans of those responsible for the project, it stands out to expand its capacity so that it can be used by more people, so that surgeon and anesthesiologist can interact at the same time.

Return to face-to-face classes at UNAM

Through a bulletin, Universas reported on the future of face-to-face classes on its campuses, and determined that the activities that were already enabled in the face-to-face modality continue to be carried out in this way, and the authorized capacity must be respected. and the established measures, such as the use of face masks.

In addition, he reported that the prevailing health situation will be evaluated for January 24 and it will be that day when he announces to the entire university community the additional measures that he will take before the start of the 2022-2 semester.