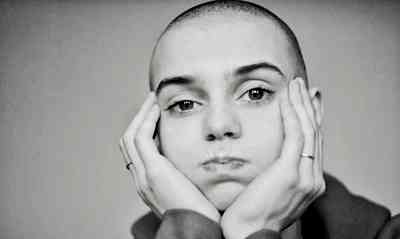 Kathryn Ferguson’s documentary focuses on the momentous early years of Sinead O’Connor’s music career, when she went from idolized to demonized.

At 23, Sinéad O’Connor was a chart-topping international superstar.  When she turned 26, she was the stuff of jokes.  She was hardly the first and wouldn’t be the last female pop artist to be ridiculed for stepping out of line, but as a sympathetic and perceptive new documentary reminds us, O’Connor wasn’t vilified simply for being erratic or unclassifiable, though that surely didn’t help.

“Everyone felt like it was okay to kick me,” O’Connor recalls in a new interview for Kathryn Ferguson’s Nothing Compares.  “I’m sorry I was so sad about that,” she adds, her glassy voice deepened by the years.  The consequences of what she endured, her withdrawal from the spotlight, and her subsequent struggles are mentioned but not explored here;  the focus of Kathryn Ferguson’s first feature film is on O’Connor’s avant-garde courage and her outrage.

The end result A dynamic and comprehensive reassessment.

Youthful daring fueled that outrage, but its roots were the wounds of a difficult childhood.  She was trying to start a conversation about things that she believed were unfair, some of them horrors that she knew firsthand.  But the Irish singer-songwriter’s protests against the Gulf War, racism, and the abuse of women and children by the Catholic Church angered many people, from flag-waving “patriots” to an angry Frank Sinatra and Camille Paglia, who spit. hate.  Based on the reaction clips Ferguson includes, the offended apparently valued the national anthem or a photo of the Pope—famously mangled by O’Connor during her appearance on Saturday Night Live in 1992—more than they valued freedom of expression. expression.  And Paglia apparently felt that O’Connor’s seriousness was a greater crime than the things she denounced.

Timing matters when you say things people aren’t ready to hear, and Nothing Compares frames her subject’s story in light of hindsight, while capturing O’Connor’s emotional intensity in those early years of O’Connor’s career. her.  The question of timing also lends an awful layer of resonance to the documentary’s headlines: Ferguson’s film got its Sundance bow just a couple of weeks after the suicide of O’Connor’s teenage son and the singer’s subsequent hospitalization.  The devastation of his recent loss resonates throughout the document, especially in the passages dealing with motherhood.

O’Connor, who was subjected to physical and emotional violence at the hands of her mother, welcomed her own opportunity to be a mother.  She was young and her career was just taking off when she became pregnant, and she and musician/producer John Reynolds embraced the prospect of fatherhood (he is one of the film’s interviewees and is credited as executive producer).  However, her record company saw things differently and sent her to a doctor who encouraged her to abort the pregnancy so she could focus on her work.  She owed it to etiquette, she said.

O’Connor had her baby.  And she took her defiance of the music business further, shaving her head and following her own gender-fluid wardrobe preferences, making her compelling and confusing at a time when female artists were expected to conform. to a feminine aesthetic.  (As for her style and appearance, a clip from an interview with Charlie Rose doesn’t do her tainted reputation any favors.)  O’Connor became known as fierce, uncompromising and confrontational, but the film reminds us, through some of her earliest television appearances, how polite and gentle she was when she didn’t let the big voice of her roared into song.

Ferguson offers exciting evidence of the flexible power of the voice even when O’Connor was still a teenager.  There’s grainy footage of her performing at a small London club in 1985, and a home recording of her singing at the wedding of Jeannette Byrne, the beloved music teacher who recognized and encouraged her gift.  Byrne is among friends and celebrity fans (Peaches, Kathleen Hanna, Chuck D) heard in the film.  Ferguson uses only audio for the new interviews, commentary being heard over a dynamic mix of scenes from the period.  With excellent editing by Mick Mahon, the director seamlessly incorporates non-dialogue renditions of moments from O’Connor’s life, adding cinematic texture to the proceedings.

An especially clever choice is the inclusion of excerpts from the 1967 documentary Rocky Road to Dublin, which evokes the Ireland of O’Connor’s formative years.  Tellingly, that highly regarded Peter Lennon film, with its critique of a repressive Church-dominated society, was essentially banned in the country for many years.  Beyond the traumas she faced in her home, O’Connor spent time at a residential training center that was connected to one of the infamous Magdalene Laundromats, where she saw firsthand the way women ” falls” were discarded.  “All Ireland talks about these ladies,” says Ella O’Connor.  “But I met them.”

Videos of O’Connor are also excerpted, including his blockbuster adaptation of Prince’s “Nothing Compares 2 U,” directed by John Maybury.  The song itself is not heard, permission for its use was denied by the Prince estate, but the images in the video, especially O’Connor’s tearful close-up, are so indelible that the song, or its memory, comes from anyway.

A pivotal event in O’Connor’s career frames the film: the all-star celebration of Bob Dylan’s 30th anniversary, two weeks after his controversial appearance on SNL.  Introduced to the Madison Square Garden crowd by Kris Kristofferson, O’Connor would soon be comforted by him when the crowd, or at least a vocal part of it, attempted to boo her offstage.  As musician John Grant comments: “The people who would boo Sinéad O’Connor, what were they doing at a Bob Dylan concert?”  Substitute the names of different artists, and it’s a question that many rock fans have asked themselves over the years of concerts.  It’s usually about an opening act’s musical style clashing with the audience’s one-track mindset: Toots and the Maytals booed as they opened for The Who, Prince booed as they opened for the Stones, a crowd of Clash that turned against Los Lobos, to name a few.  -leading examples.

But in O’Connor’s case, her music was a well-known and widely admired quantity;  people were angry with her.  It’s no longer shocking to talk about the things she talked about: mental health, child abuse, the crimes of the Church.  Ending the pain of that 1992 Garden show, Nothing Compares continues with a contemporary performance from O’Connor.  As a teenager, she needed to sing, and still sings, away from the pressures of pop stardom, but Ferguson shows that she played a crucial role in rewriting the rules of the pop star game.  Like most people at the forefront, she paid the price.  Speaking of her effect on “an entire decade or two decades of artists,” Chuck D puts it succinctly: “She broke the ice.”