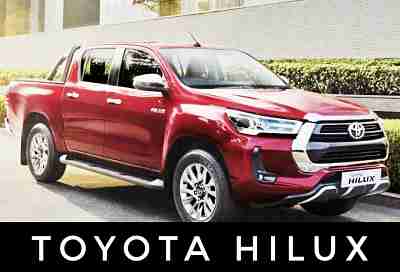 In India, Toyota launched the Hilux pickup truck, which has similar features to the Fortuner SUV

Toyota Kirloskar Motor (Toyota Kirloskar Motor) on Thursday introduced the much awaited Toyota Hilux pickup truck (Toyota Hilux Pickup Truck) in India.  The Hilux price will be announced in March 2022, when the company will officially launch it.  Toyota Hilux is available in India in 2 trims – Low (Low) and High (High).  Toyota has officially opened the bookings for the Hilux from Thursday.  Customers wishing to buy this pickup truck can book it by paying Rs 1 lakh.  Its delivery is set to start from March.

Look and Design of Toyota Hilux

The new Toyota Hilux gets an attractive front look with muscular bumpers.  It gets a hexagonal-shaped grille, silver skid plates with thick chrome lining.  The LED projector headlamps with integrated LED daytime running lights add to the appeal of the Hilux.  The double-cab pickup truck gets multi-spoke alloy wheels, vertically stacked taillights.

Being a lifestyle pickup truck, the Toyota Hilux pickup truck offers a luxurious cabin both in terms of looks and features.  Looking at its cabin, it seems as if the Toyota Hilux pickup is inspired by the company’s popular SUV Toyota Fortuner (Toyota Fortuner).  It gets features like 8-inch tablet-like touchscreen infotainment system with Apple CarPlay and Android Auto, soft-touch leather upholstery, driver armrest with storage, dual-zone automatic climate control.

Engine and Power of Toyota Hilux

The Hilux gets the same 2.8-litre, 4-cylinder turbo-diesel engine as the Fortuner.  This means that this engine generates 204hp of power and 420Nm of torque (500Nm in the automatic variant).  Like the Fortuner, transmission options on the Hilux are a 6-speed manual or a 6-speed torque converter automatic gearbox.

However, the Fortuner is offered in both 4×2 and 4×4 drive configuration options.  But the Hilux is only available in 4×4 configuration.  For better off-road capability, the Hilux also gets a low-range gearbox, front and rear electronic differential locks.  Its approach angle is 29 degrees and departure angle is 26 degrees.  In addition, the Hilux has a water weeding capability of 700 mm.

Toyota Hilux pickup may not match with Toyota Fortuner in terms of sales.  However, it comes as a great option for the buyers who like the adventure lifestyle.  But the automaker is looking to carve a niche for itself with the new model.  The Toyota Hilux has already sold over 20 million (20 million) units worldwide since its introduction in 1968.  Toyota sells this pickup truck in about 180 countries around the world.

The demand for large SUVs and pickup trucks is witnessing an increase from potential buyers across the globe.  The popularity of these utility vehicles has increased so much that manufacturers are paying more attention to them.  Pickup trucks have started getting electric powertrains as well.  Toyota aims to generate more interest among home buyers with the Hilux.