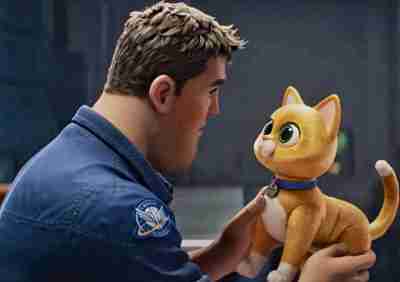 Pixar provided a fresh look at its Buzz Lightyear origin story with a trailer that introduces the rest of the cast — including a robot cat.  Lightyear is a sci-fi action film about the character of Buzz Lightyear, not a toy, this time voiced by Chris Evans.  The new trailer features some of his Space Ranger compatriots — voiced by Keke Palmer, Dale Soules and Taika Waititi — as well as Sox, a creepy robotic feline played by Peter Sohn.

Now, the whole premise of Lightyear is a little confusing, and in a statement, director Angus MacLaine tried to clear things up.  “Toy Story felt like being a Space Ranger had this incredible backstory that only the world touched upon, and I always wanted to explore more of that world,” he explains.  “So my Lightyear pitch was, ‘What movie did Andy watch that makes him want a Buzz Lightyear toy?’  I wanted to see that film. And now I am lucky enough to make it.”

If that doesn’t clear things up, then you will have to wait till the film releases on June 17.