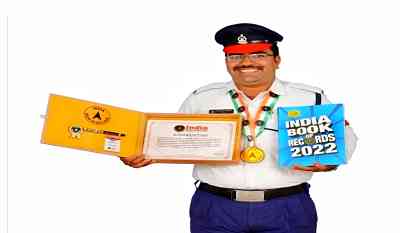 These are the achievements of Mahesh Mishra, also known as Traffic Man, who is listed in the India Book of Records

India Book of Record: Apart from performing his duty for 15 years, he is making excellent contribution in the field of social service, has set up more than 500 traffic camps in school-college at his own expense, Corona  Even during his time, he helped the poor and needy without stopping.

Baikunthpur – India Book of Record: Lance Naik Mahesh Mishra, who has been synonymous with service for the last 15 years along with performing government duty, has become famous as a traffic man in Korea district.  Even during the Corona period, he did a lot of service to the poor and needy.  Apart from setting up more than 500 traffic awareness camps at his own expense, he has made headlines by doing many types of work ranging from distribution of free spectacles to the drivers, filling the potholes of the road.  He has also been a Gold Medalist in 3 subjects.  In view of all these service expressions, the name of Lance Naik Mahesh Mishra has been recorded in the India Book of Record-2022.

Lance Naik Mishra has organized more than 500 traffic camps in schools and colleges at his own expense for the last 15 years.  During this, about 4 lakh general public have been educated and taught traffic lessons up to the district-divisional and state level.  At the same time, there has been continuous participation in the field of social service.

Distribution of free spectacles to drivers at own expense, filling of potholes at major intersections of the city, helping the injured in road accidents, distribution of nutritional food to malnourished children, getting boards related to traffic rules, signs and symbols installed in government colleges, Nomad  Radium is tied around the neck to save cattle from accidents.

Lance Naik Mahesh Mishra has been working continuously in the field of social service for the last 16 years.  After the name is registered in the India Book of Records, people have started demanding out of turn promotion.

Lance Naik Mahesh Mishra is a Gold Medalist in Sanskrit, Political Science and Sociology in the postgraduate examination. He is currently a PhD Scholar.  On being registered in the India Book of Records, Lance Naik Mishra said that it is not my personal, but it is the honor of the state including the district.