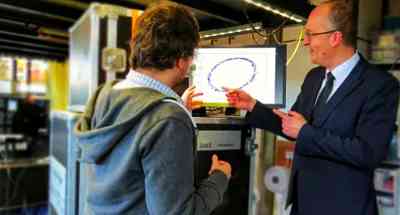 Researchers from the University of Birmingham, working with industrial partners, have demonstrated what they said was the world’s first quantum gravity sensor that worked reliably in the real world, detecting underground structures outside tightly controlled laboratory conditions.

Their device, described in the journal Nature, “wins an international race to take the technology out”, the university said.  It discovered a buried tunnel carrying utility pipes about a meter down a road, by detecting subtle variations in gravity associated with the duct.

Professor Kai Bongs, principal investigator from Birmingham’s UK Quantum Technology Hub in Sensors and Timing, said the breakthrough could open a commercial avenue for more precise and deep underground probing and mapping, which is possible with existing techniques such as ground-penetrating radar.

READ MORE: ‘Spine-chilling’ giant flying reptile that took to the skies 170m years ago was discovered in Scotland | Education

“With this success, we have the ability to eliminate poor records and reliance on luck as we search, build and repair,” he said.  “An underground map of what is currently invisible is now an important step, ending a situation where we know more about Antarctica a few feet below our roads.”

Construction and infrastructure projects will be an important application, said George Tuckwell, director of environmental and engineering consultancy RSK, one of the project’s commercial partners.

“Detecting ground conditions such as mineworks, tunnels and unstable ground is fundamental to our ability to design, build and maintain housing, industry and infrastructure,” Tuckwell said.  “The improved efficiencies this new technology represents could change how we map the land and deliver these projects.”

Other fields that could benefit from the technology include archaeology, hydrology, and agriculture.  The tool can find buried graves and water courses and indicate farm soil conditions.

The Ministry of Defense is also participating in the project.  As the technology matures, it could be used to reveal underwater navigation and underground, said quantum researcher Gareth Brown of the Defense Ministry’s Defense Science and Technology Laboratory.

The sensor uses a quantum technique called atomic interferometry.  Ultra-cold rubidium atoms that fall under the influence of gravity are illuminated with a laser beam.  The resulting interference patterns depend on the speed with which they fall – and indicate with great accuracy the strength and gradient of the local gravitational field, which in turn lies beneath the ground.

Atomic interferometry, as with all quantum technologies, is very sensitive to environmental disturbance, especially vibration.  The Birmingham team’s biggest technical achievement is making the equipment flexible enough to be practically useful on the road or in the field, rather than just in the laboratory.

“We have taken it as far as we can in an academic setting. Now it has to go outside the industry,” Bongs said. The device was made smaller, more mobile and more responsive before reaching the market.  should go.

He said the Birmingham researchers have discussed commercialization with their industrial partners, RSK and the US Teledyne Technology Group’s UK-based subsidiary Teledyne e2v, they have also considered setting up their own start-up company to leverage the research.  have considered.

The project is part of the UK’s National Quantum Technologies programme, with a budget of £1bn over 10 years.